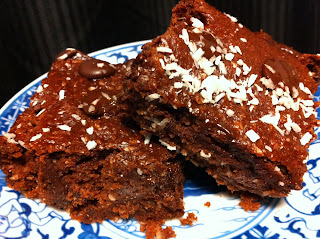 You'd think I was having a breakdown with all the chocolate the last week. In reality, I got fixated on the delicious Vegan dark chocolate chips I picked up... and want to keep putting then in everything! That, and I like to keep my work girls happy with Vegan treats. (See how much better it sounds when it's for someone else?)
I decided to give SK another chance, and made Maple Walnut Brownies. As per usual, I used whole wheat flour and added fiber for a healthier treat. I added chocolate chips (because the cocoa powder couldn't possiblly be enough) and substituted coconut for the walnuts. The result was a light brownie that was moist without being overly rich.
I've noticed the majority of HIAV's recipes use maple syrup as a sweetener... and not only is it crazy expensive, but I'm not fully convinced it's the best with chocolate. Agave has really taken off in the last 10 years since it was published, so I'm pretty sure I'll stick with my gut and substitute that next time.
Posted by Unknown at 2:50 AM