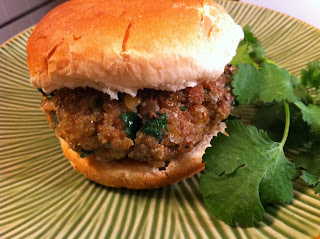 All the Sarah Kramer loyalists out there will probably send me a lot of hate mail after this post. But this recipe - for Big Ben's Lentil Burgers - is the reason why I'M a loyalist to Isa Chandra Moskowitz & Terry Hope Romero. It's not that I haven't had delicious recipes from How It All Vegan! or La Dolce Vegan! But the instruction, chatter, and reliability of the recipes is nothing compared to Veganomicon and Vegan With A Vengeance.
Anyhow, no one is here to read about which Vegan chef I love more, so here's what happened with these burgers. I followed the recipe closely - even making my own breadcrumbs with some dried sourdough. I used the cooked lentils from the day before, mixed it all up as instructed, and attempted to shape it into patties... only to have a crumbly and dry disaster. There is no way they'd stay enough to be cooked or served this way. (Maybe the recipe was missing something... but don't they pay people to try out recipes before cookbooks are published?)
Recipe experience to the rescue! I added in 1/2 c. vital wheat gluten (as used in Black Bean Burgers a few weeks ago) and 1/2 c. water... then spiced them up with cumin, garlic and chili powder. Voila! Super super delicious lentil burgers, with a bite! 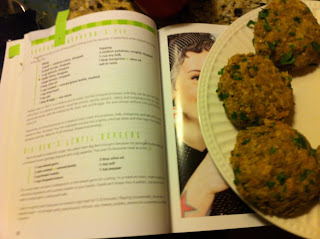 p.s.
This is why you'll see a lot of scribbles throughout any cookbook you might borrow. If only there was someone to do it in the books BEFORE you buy them!
Posted by Unknown at 9:12 PM