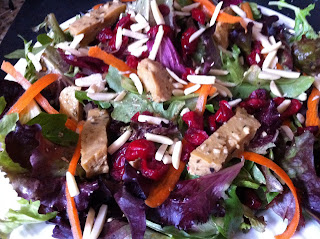 While my kitchen was already crowded last night for my pasta yumminess, I got inspired to try my hand at seitan again. The Veganomicon version I made last year was great, but I felt obligated to give the La Dolce Vegan a try. It's a given that seitan is a digestive nightmare. No one digests it terrifically, but it tastes great, and is a high protein "meaty" alternative to soy. It's the same process as the last round: make the dough, boil it in a flavored broth, serve a variety of ways.
Anyhow, I made a double batch of the Faux Chicken and served it three different ways during the next few days. The first (and third) were for salads - the first time just served "as is" and sliced. Add dried cranberries and almonds, and there was nothing boring about it. But this version of seitan definitely was a little spongier than I prefer. (A few days later, I baked it before serving and it really improved the texture.) 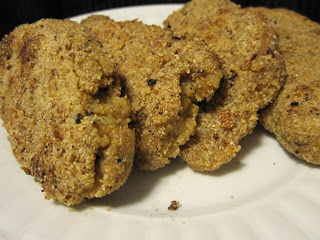 The next, and best, way I prepared the Faux Chicken was as Jay-Lo's Fried "Chicken". Yum! The best faux meat I've ever made. I modified the La Dolce recipe to use the Multipurpose Coating for Dredging Foods from Vegan Soul Kitchen - and I definitely think the spicier cornmeal breading was the winner. (It's the same coating I used for tomatoes in the fall, plus a lot more chili powder and fresh ground pepper this round.)
I made a "spicy chicken sandwich" with Vegenaise (the best of Vegan mayonnaise, hands down) and Clancy's... it may not be the healthiest of Vegan sandwiches, but it was a great alternative to a frozen Boca patty! And with Ezekiel tortillas, it's one less processed carb. I'm going to make them into "nuggets" the next time I'm craving some Vegan fast food! 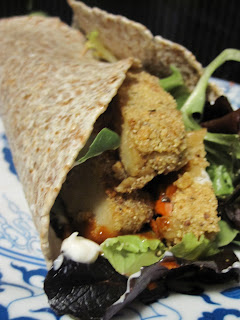