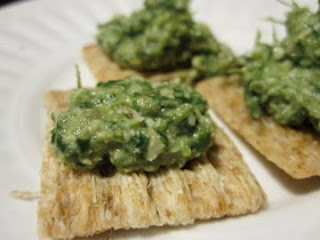 I can't tell you how many Vegan potlucks (or dinners, or parties) I've hosted where most people bring chips and salsa. It's almost as if there aren't any other Vegan snack foods. It's easy to forget that party favorites often include dairy. (Cheesy dips are a crowd favorite.)
I was scrambling for a dinner idea when I found the recipe for Asparagus-Spinach Dip. The Vegan answer to Spinach Artichoke dip, this was a yummy, sharp spread. And healthy! A pound each of asparagus and spinach, the veggies were really crammed in. I actually liked it better while it was warm, because the capers seemed to be disguised better then. But if you love capers, this would be the perfect dip for you! It was tasty on whole wheat crackers, as well as on a Sami's Millet & Flax Bagel for a gluten-free breakfast.
The raw cashews gave the dip a "cheesy" creaminess, like they did for the cashew ricotta. I'm eager to try out that concept with spinach and artichokes, or maybe even a tex-mex "cheesy" dip. Toss in some nutritional yeast, and I might have found a winning idea. 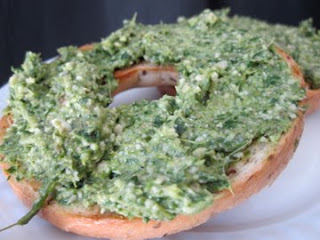