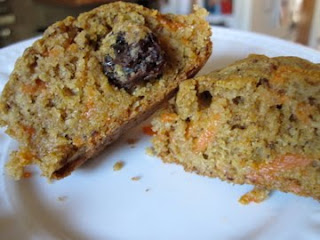 Who doesn't love Carrot-Raisin Muffins? Apparently this recipe nailed the Vegan secret to good muffins... but there are a few adaptations I continue to make. Starting on baking Vegan "sweets" has made me realize there are two types of recipes. Recipes are über healthy; or recipes are designed to taste like full fat/non-Vegan/traditional recipes. There just isn't enough balance of both.
These muffins were scrumptious, but I made them a ton healthier by doing the following. I used whole-wheat flour for all-purpose, I added flax meal, and I omitted most of the sugar. The raisins were sweet enough for me. (And the recipe called for soaking them in hot water first, a trick I was convinced I'd created years ago!) I upped the spiciness by adding allspice and clove to the cinnamon and nutmeg, and it made them taste like a spice cake instead of just a carrot muffin. Next round will include walnuts, for an extra nutrient (and crunch) boost.
Either way, these muffins were a fabulous start to the day. If I'm going to bake, I'm a lot happier when I can sneak some fruits and vegetables in! 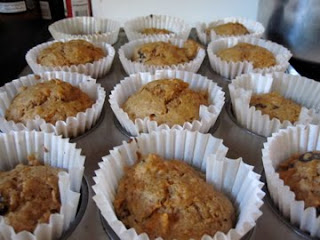