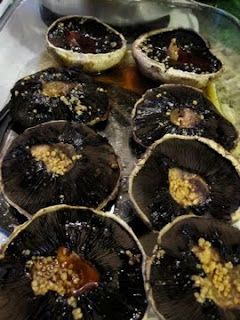 I've made Roasted Portobellos more times than I can count. After all, it is the Vegetarian version of grilling up a steak. This time was probably the best yet. I marinated them for 30 minutes with blush wine (it was what I had in the house), olive oil, soy sauce, balsamic, and minced garlic. I used the mini portobellos, partly because they are cuter, but also because they seem to have a more tender texture. Thirty minutes under foil at 400 degrees, then flipped for another ten... I can only imagine how good they'd be on a burger or sandwich. 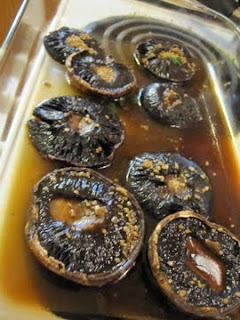 Instead, I sliced them up and served them on top of Bulghur with Spinach. Yes, it's the same thing as bulgar. And once again, I was impressed with bulgar. It's so easy to make, and the nutty grain is hard to compete with. Yet another recipe I'll share the adaptation for! 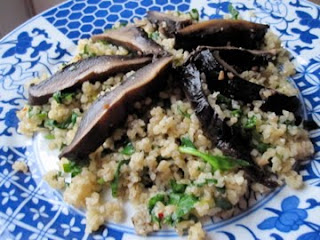 Just like the last bulgar salad, this dish was better the next day, and was just as good cold. I used a lemon pepper spice combination, and that balanced out the balsamic infused mushrooms perfectly. Another "leftover" success!
Posted by Unknown at 2:46 AM