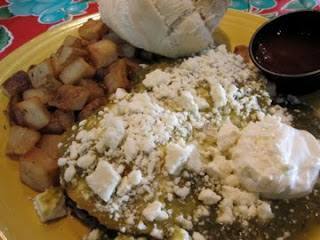 Ok, so I didn't make any of this deliciousness. Nor is it all Vegan, or healthy. But I just returned from a visit to North Carolina, and can't help but share some of these amazing finds (and ideas)!
Turns out Charlotte has an amazing amount of Vegan options! The first (and resulting favorite) stop was the Flying Biscuit Cafe - I would eat breakfast there every day for eternity if I could. I'm kind of a breakfast snob (or at least a breakfast junkie), so you can imagine my excitement that they had TONS of Vegetarian and Vegan items (including Tofu Scramble) on the menu! The Egg-Ceptional Eggs (above), were obviously not Vegan, but left me eager to try a Vegan spin on the Huevos Rancheros theme. They used a tasty black bean patty instead of the traditional refried variety. 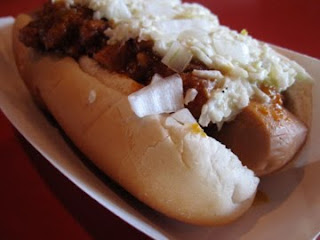 The next great discovery was The Penguin. It was shown on "Diners, Drive-ins, and Drives" on the Food Network, and for good reason. This place was awesome - and the Jumbo Soy Dog was the best idea ever! How does the South come up with these treasures? Vegetarian chili, mustard, slaw, and onions on a veggie dog. I can't believe I've been missing this combo all my life. Deep Fried Dill Pickles on the side - so unhealthy, but probably the best guilty pleasure around. 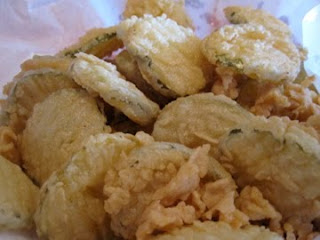 The last Charlotte treasure was The Common Market. Why can't there be a place like this in my neighborhood? Beer, wine, groceries, AND a veg-friendly deli? I was so disappointed I couldn't try one of their many Vegan sandwiches... but now I have a place to start (and drag Chad to) the next visit down!
Posted by Unknown at 5:49 PM