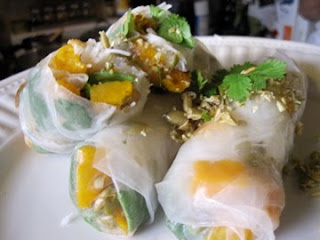 This week was all about the "complete theme" menus, so I went for Asian Fusion again. The main dish was Butternut Squash and Pumpkin Seed Rice Paper Rolls. Once again, spring rolls for the win. They really are good with everything, especially something crunchy like pumpkin seeds. Thankfully Drew helped me roll dozens of these little guys. They are really fun to roll up and make, but I realized the novelty wears off when you're making several other dishes.
The butternut squash was surprisingly good in these, but I don't know that it was worth all the extra time. Cutting and roasting the squash ahead of time added depth, but also took close to an hour, and then they still needed to be rolled up. The thing with spring rolls is that they are almost always neutral flavors, and the kick is the dipping sauce. So next round I'll stick with tofu, cucumbers, anything that doesn't have to be cooked first! The Cranberry-Chili Dipping Sauce was a tasty complement to the rolls, the serrano chilies spicing up the cranberry sweetness. Even so, I'd definitely try something less sweet if I make these again.
The only other warning? Ask your guests how they feel about cilantro before going crazy with it like we did. I love love love cilantro, in anything, and a lot of it. But it's a "love it or hate it" item, and an easy way to ruin an awesome meal for someone who is not a fan! 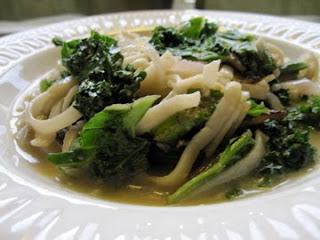 The next dish was Udon with Shitake Mushrooms and Kale in Miso Broth. I probably got a little overzealous by adding this recipe in, but I've been a neurotic cooking machine and can't help but do it all in 3's. Regardless, this dish was delicious! I didn't anticipate it being as thick and hearty as it turned out, and in reality, this could have been a dinner on its own. The fresh kale was the perfect balance to the doughy udon noodles. I've never used shitake mushrooms in a soup or stew, and they were great. Plus, they are full of beta-glucans which help boost your immune system! It's like a two-in-one. 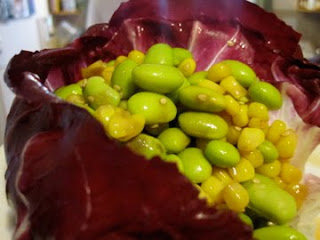 The final touch was the Corn and Edamame-Sesame Salad. I used the suggestion to serve them in radicchio cups, which was critical for appearance. The salad marinated about an hour, which was just enough to absorb the sesame flavor. I will definitely make this salad again with fresh corn, and with something with more color (like red peppers) to add to the excitement.
Turned out to be a pretty great Asian-inpired dinner party... even with way more food than any of us could eat!
Posted by Unknown at 2:34 AM