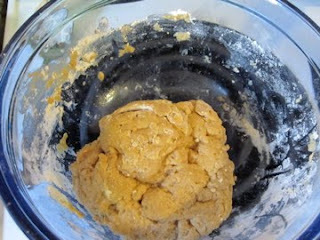 I've been cooking Vegetarian for 15 years, and I decided I had to bite the bullet. I had to make friends with seitan. Sure, I've eaten it over the years, generally picking up a package that is ready to cook. But I had no idea what went into making it!
The first step for Simple Seitan was to make the ball of "dough" - which was so elastic I almost couldn't knead it. 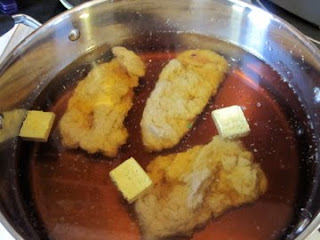 Then the 3 pieces of "dough" are cooked in broth. For an HOUR. Good thing I had other things to make during this process! The Vegan bouillon and soy sauce added flavor to the "fake meat" and I started on my other dishes. Before I knew it, it was done, 3 squishy patties of meat substitute. 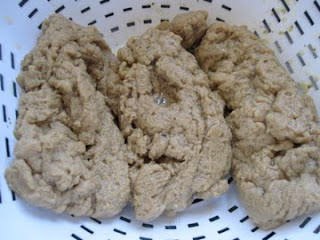 It sure didn't look delicious, but once sliced into manageable pieces, was a success! It made enough for 2 recipes, but for all the waiting it took, I'll double it next time around. Seitan is surely something that will get better with practice, but after my first experiment, I think we're friends. 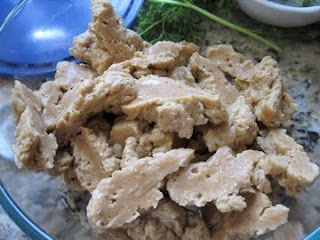