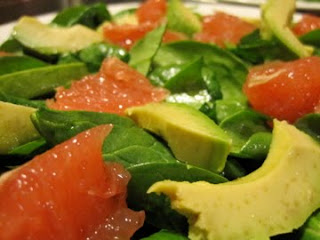 I love having my family in town. It's the biggest and best reason to be back in the Mitten. And right now, it's been great to cook for them. My Aunt Monique calls this cooking project "Nicole on Wheels" - and she's been a huge help in the kitchen when we have dinner together. Now she and my Mom are "donating" to the cause. I'm so grateful! Not only is it much more enjoyable cooking for others, but it's a huge help with ingredients. (This unemployment for 12 weeks makes cooking an expensive hobby!) If you want me to cook for YOU, let's talk. 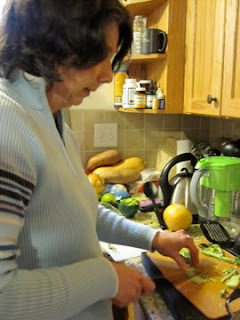 I was lucky to have Monique's help again, especially now that I realized I've been using my injured wrist way more than I'm supposed to. The healing process is so frustrating!
This Thursday dinner started with a Moosewood favorite, Spinach Avocado Grapefruit Salad. It was a surprisingly simple combination - using only a bit of olive oil, salt and pepper for the dressing. The result was surprisingly delicious. 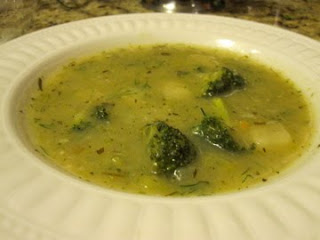 The next course was Broccoli-Potato Herb Soup with Fresh Herbs. I don't make a lot of soups, but not for any reason. I always enjoy soup, especially when the weather is less than warm. This soup was another winner... Pureeing part of it gave it a creaminess, and the potato and broccoli chunks were extra filling. I didn't have the fresh mint it called for, so I used extra fresh dill, and it worked well. A very mellow potato chowder style soup, yet very tasty. 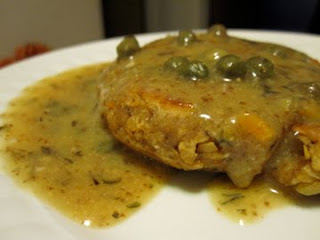 The final part of the meal was an experiment with "meat substitutes". Much less time consuming than traditional seitan, the Chickpea Cutlets were filling savory patties. Crunchy on the outside, chewy and "meaty" on the inside, and no weird fake meat flavor. They'd be good all sorts of ways, and I'll definitely make them again. The Mustard Sauce was less of a success... a bit too mustard-y, and it turns out I'm not a huge fan of capers after all.
I said I'd try every recipe once, and I'm on my way. Like everything in life, you win some, you lose some.
Posted by Unknown at 2:47 AM