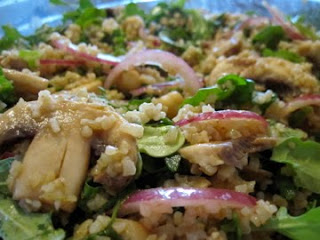 Oh, theme dinners. How I love you.
Luckily Veganomicon has a plethora of suggested menus. This time around it was "The Vegan Ghost of Julia Child" - and introduced me to all sorts of new ideas. The first round was Bulgar, Arugula, and Cannellini Salad. One result: amazing. I made it a few hours ahead, which was a critical step for the flavors to marinate. I substituted garbanzos for cannellini beans, which worked fine. It was my first time using bulgar, and it was a snap, resulting in a crunchy nutty grain perfect for salads. The spicy arugula and strong red onions gave the salad a kick, and were perfect counterparts to the basic bulgar and mushrooms. I doubled it, shared it with friends and family, and immediately wanted to make it again. 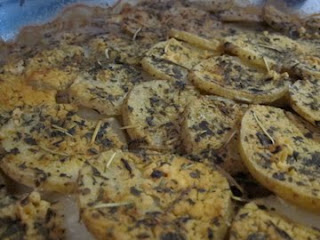 Who knew you could make Vegan scalloped potatoes? Definitely not Julia Child! Once again, nutritional yeast to the rescue. The Herb-Scalloped Potatoes were decent, but would definitely require a little tweaking to appeal to the "average" eater. I'm all for healthy eating, and revising old-school recipes to make them healthier. But scalloped potatoes need some richness, just like mac'n'cheese. Maybe Vegan margarine, soy creamer, or more nutritional yeast will do the trick next time. It was also a great dish to make ahead of time, since I had lots of idle time to prep the salad and potatoes during my seitan prep. 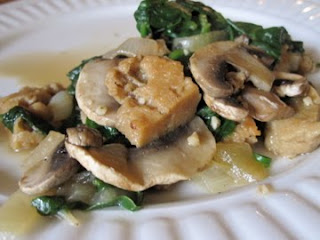 The final dish was Sautéed Seitan with Mushrooms and Spinach. It was a quick & easy main dish, and was a great way to use the seitan I had made earlier in the day. Even for those of us who don't LOVE mushrooms, it was a delicious take on stir fry.
I never thought I had a desire to cook like Julia Child, or in any French/Traditional method. But since I was going to try it, at least I can feel good about doing it Vegan!
Posted by Unknown at 2:32 AM