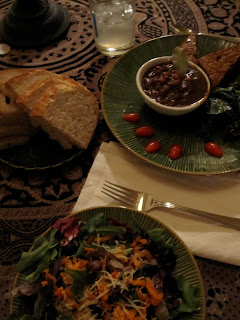 My shopping trip a few days ago prepped me for a lot of firsts. Practicing the art of cooking greens, perfecting tempeh, experimenting with smoke flavor. Soul food is something I never cooked, probably because I barely ate meat as a kid. But this was the execution of the Vegan variety - and it was worth leaving the comfort zone.

So I picked my first three recipes from Veganomicon and started the cookbook fun. Officially. Cheater Baked Beans were a snap. And, like everything else I cook, they were easy to spice up a bit. I definitely have a higher threshold for spiciness than the average person, but I'm amazed how weak most recipes in EVERY cookbook are. The combinations and flavors can be amazing (and this recipe was the same), but I've been in the habit of doubling most spices for a little more kick.

For the main course, Smoky Grilled Tempeh was the challenge. I guess I like smoke flavor more than I realized, because this stuff was good. It was my first time steaming the tempeh before cooking it, which (once again) made me ask what I'd been doing all these years. I broiled it after that, as the recipe gave option for, but I'd definitely grill or pan fry it next time. Good (yet mild) flavor but a bit too soft under the broiler.

Sauteed Collards were last, and although the name sounds boring, they were the opposite. I used the rainbow chard I bought instead of collards, thanks to a recommendation from my produce buddies. They used the marinade from the tempeh, yet managed to have a totally different flavor. Chard definitely takes less time to cook than chewy collards, so a few minutes less next time and they'll be perfect.

Add in some fresh sourdough bread and some tequila martinis, and this Monday night meal is complete!
Posted by Unknown at 2:26 AM